I finally jumped on the “Ted Lasso” bandwagon. I had heard it was good, but it sounded corny and I wasn’t sure I wanted to watch a “fish-out-of-water” TV show, especially if the humor was at the main character’s expense. I have lived enough of my life feeling like I didn’t fit in or didn’t belong and did not want to watch something that would surface all those old feelings. But folks kept saying it was one of the best things they had watched recently, so I decided to give it a try. Six episodes later, I shut down the iPad for the evening and, over the next two nights, finished all the available episodes.

The show (which streams on Apple TV and is rated for mature adults) is a bit raunchy. More f-bombs and sexual content than needed to make it work, if you ask me. But if you can get past that, there is a goodness that runs at the heart of this show that draws you in. You see transformation happening in the characters: They are becoming better people and truly caring about each other, and it seems to start with Ted Lasso and his goofy but genuine heart. On the face of it, you would probably discount him. He does not seem to have enough gravitas. But what he does have is an amazing ability to see people. He really sees them, makes an effort to connect to them, whoever they are, and through his interactions, builds them up and helps them grow into their potential. He does not take cheap shots at someone else’s expense, and somehow, he is able to let criticism roll off his back and see the good in others even when they are against him. Even more, he forgives others readily, and offers his own apologies immediately when he has hurt someone else. It feels so different from where we are living as a culture right now, which is why the show is so captivating.

Contrast this with a Master Class I have been taking through Fresh Expressions, in which we have been talking about the sociological issues affecting the church. Polarization. Being fractured into like-minded groups and casting the other as the enemy. The lack of social cohesion and institutional trust. We have lost the bridge organizations that helped an individual or group connect to the larger community. The church used to be one of those bridge organizations, but the teacher of my Master Class posits that the church has been captured by the culture, and we are as divided and sorted and polarized as the rest of the world. And when that happens, we stop being who we are called to be as a church where there is no Jew or Greek, no slave or free, no male or female, and instead we are all one in Christ Jesus (Galatians 3:28). If we are going to be counter-cultural, it cannot simply be in reaction to one aspect of the culture (which is what is on our airwaves right now—the political right and left each labeling the other as the enemy); rather, we need to stand in a posture that is above and beyond all of it.

Trusting the power of love, believing in people, and calling them to believe in themselves and what they have to offer to others: Wasn’t that a prime way Jesus went about his ministry? Think about it. Zaccheus. The Samaritan woman. Nicodemus. Peter. He calls us in. He invites us to see ourselves as God sees us. Yes, there might be some accountability, but always it is to grow into who we can be, to live freely, full of love and grace, and to see ourselves as part of a larger community—not simply as individuals making our own way in the world. 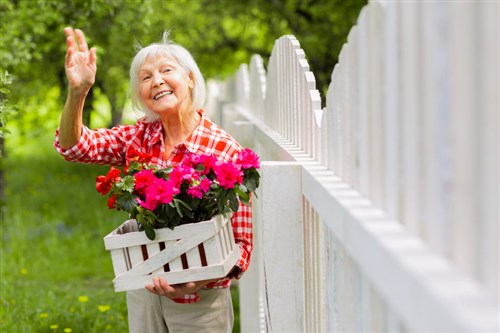 So here is what I wonder: What would it take for me, for us, for the church to be like that? I was up near Bemidji in early August staying at a cabin. I went out walking or running on the gravel roads around me, and this interesting phenomenon happened that I had forgotten about. Everyone waved at me as they drove by. Every time. They didn’t know me. But it was an acknowledgment that they saw me, which I really appreciated as I did not want to be run over while walking. It created a small connection. Because of the way people had been greeting me, when I ran by a house with the most stunning gardens and the owner was outside working on them, I decided to be bold and walk up his driveway to tell him how much I appreciated his work. I learned a bit about him and his labor of love in the creation of these gardens. We learned each other’s names. Small stuff, but we took a moment to connect. I walked away smiling, and hopefully he did too.

You might think this is not radical, but I am reserved by nature and I live in a big city where I have been socialized to keep my head down, walk like you know where you are going, and don’t talk to strangers. I was taught those skills for my self-preservation, but how much are they hurting us as a society? Too much “I,” not enough “we,” as Ted Lasso says. I deeply believe we are inextricably connected as human beings, and we are held up by love. We are all beloved children of God. And I want that to show up in my daily interactions. I want to be more like Jesus, and his way of living and loving that is so counter-cultural.

So church, do you think there is a chance we could once again become that bridge organization in our world? A place where all are seen, all are loved, all are invited to grow into the best version of themselves, and we do it together. No divisions, no labels, no us vs. them. Just followers of Jesus staying true to our calling to love one another…all the one anothers!

​Rev. Cindy Gregorson is director of ministries and clergy assistant to the bishop for the Minnesota Annual Conference of the United Methodist Church.