This spring, when COVID restrictions were lifted and her two rural churches returned to in-person worship, Rev. Amy Strom noticed that people were exhausted and had lost their ability to talk with and relate to one another.

“Our fun banks were empty,” she said. “We were all struggling with feeling deflated and needing to be recharged.”

Strom, an avid kayaker for 16 years, knows firsthand that the bilateral stimulation of paddling on water is a powerful tool for healing from trauma, something we’ve all experienced over the past 18 months. So she extended an invitation to her weary parishioners: “Let’s go kayaking.”

Every Thursday at 6:30 p.m., anyone who wanted to would meet at a lake and get out on the water. Strom owns five kayaks and used a trailer to haul three or four each week for those who needed one. A few people came to the first outing, and a few more came to the next one. 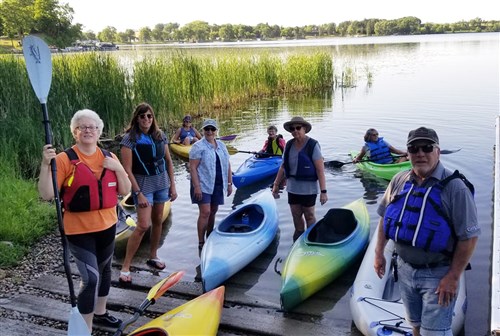 Between early June and Sept. 16, Strom met anywhere from four to 19 people weekly for an evening of kayaking. At first, it was exclusively members of one church, Vergas UMC, which is surrounded by lakes and saw 30 to 40 people in worship pre-pandemic. But they soon began to invite relatives, friends, and neighbors. There were many weeks when Strom found herself exchanging introductions with newcomers.

A few weeks in, some participants offered up their pontoons so non-kayakers could join in. People also started offering up their homes for food and fellowship after the kayaking. Bonds formed between attendees, who came from both Vergas UMC and the community at large.

Strom began to notice a kind of transformation that took place. At one of the first gatherings, she observed kayakers keeping to themselves and going in a dozen different directions on the water. But eventually, they started to kayak toward each other, initially finding one partner on the water and then forming small groups. Some weeks in, rather than individually hauling their kayaks to their vehicles at the end of the night, people began helping each other.

“We really are created for community,” said Strom, who is convinced that kayaking facilitates both relationship building and personal growth. “You’re never the same when you come off the water. You’re different. You’re meeting God in nature.” 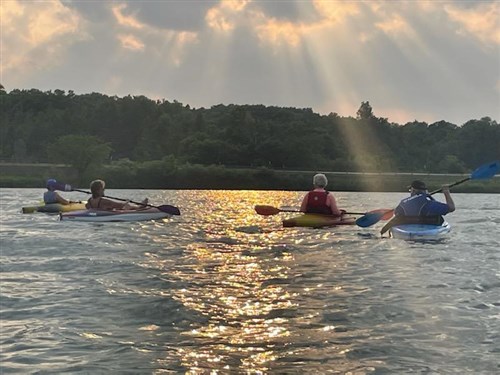 Strom was intentional about not bringing “churchy” elements to the kayaking gatherings. There were no sermons, devotions, or prayers. More than anything, she wanted attendees to know that they had a place where they could be accepted and belong.

“We have given them a positive experience of Christians and shown them what the church can be,” she said. “We want the message to be: We love you without any strings attached because you’re made in the image of God. If you want to come to church, great. Now you’ve tasted how we’ve loved people.”

Still, attendees knew she was a pastor, and some started asking her questions:  How do I become a member? Can you tell me about baptism? What’s the Methodist position on abortion? The questions led to rich conversations, and some new faces within the church.

Even though summer is over, the kayaking crew has no plans to give up its weekly gatherings. Last week, they transitioned to meeting around a bonfire rather than at a lake. When the cold weather comes, they’ll meet inside for game nights.

Strom is amazed when she thinks about how 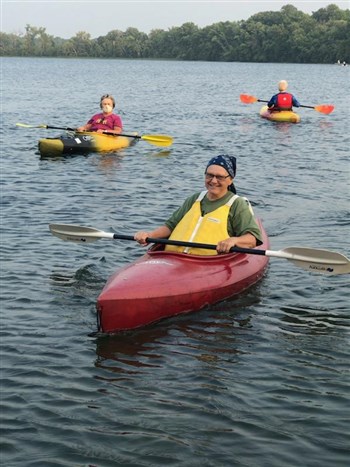 beautifully and how organically the kayaking gatherings have taken off. And congregation and community members aren’t the only people who have been positively impacted.

“It has strengthened my relational bonds within the church and given me opportunities to do discipleship in a non-discipley kind of way,” she said. “I’ve discovered that this is my best way of leading, and it’s a perfect pairing for how they want to receive my leadership.”

Strom and other core kayaking leaders are currently applying for a grant to expand the ministry. And Strom is feeling called to take smaller groups to deeper places through kayaking. For example, she’s thinking about how to use kayaks for creation care: picking up trash, testing water quality levels, and the like. As a trained spiritual director, she’d also like to offer spiritual direction to both individuals and leadership teams out on the water.

For Strom, kayaking and faith are inextricably intertwined.

“Everything I’ve learned about Jesus I’ve learned from kayaking,” she said. “You can’t follow Jesus with one foot in the boat and one foot on land. You have to be all in.”

Christa Meland is director of communications for the Minnesota Annual Conference of the United Methodist Church.